While there may not seem to be a correlation for my family’s love of singer/songwriter, Joanie Leeds, newest children’s album about her love of raising her family in Brooklyn, NY, I see many parallels in how my own adopted city of Austin, where my children were born and are being raised, and how much the art scene has been a major integration of our family life that has enriched our children’s lives.  You don’t have to have a Brooklyn Baby to relate to the lyrics that reflect many relateable family scenarios weaved into Joanie’s songs of kids growing up in a larger city.

Six years ago, award-winning singer/songwriter Joanie Leeds packed her bags and moved from Manhattan’s Upper West Side to the vibrant, artistic neighborhood of Williamsburg, Brooklyn. Here she found not only a place to start a family, but also a magnificent melting pot metropolis that offered dazzling adventures on a daily basis.  Inspired by her love for all things Brooklyn, Joanie will release her eighth family album, Brooklyn Baby!, on May 19.

Produced by Jesse Lauter (Tedeschi Trucks Band, Elvis Perkins, Carl Broemel from My Morning Jacket), Brooklyn Baby! is a real genre-bender, containing elements of folk, Southern rock, hip hop, pop and punk presided over by a singer whose sheer command of vocal artistry is second to none.

Joanie Leeds explains, “Every day of my life in Brooklyn I’m amazed at how incredible this hugh borough is.  The sights, smells, noises, and people I meet are constantly on my mind as a songwriter, and I wanted to get it all down for this album. I’ve hoped to work with producer Jesse Lauter for a long time and feel so lucky that he took on this project. He made this record sound awesome!”

Songs about the park system (“Ferry Nice”), public transportation (“Subway”) and Brooklyn’s most famous dish (“Pizza”) are a given, but the heart of the album embraces both a Brooklyn mentality and sentimentality with love (“Love is Love”), thirst for education (“Library Book”), healthy eating (“Apples in My Apples”), and Yiddish expressions (“Shayne Punim”). The album closes with Joanie’s take on Brooklyn-born Lou Reed’s gentle tune, “Sunday Morning.”

Gifted with a soulful, “rock solid” voice that ranges from low and bluesy to high, light, and breezy, Joanie Leeds is an exceptionally versatile artist who brings serious musicianship to the table right alongside a terrific sense of fun and fashion.  Says SiriusXM’s Kids Place Live host Mindy Thomas, “Joanie Leeds is that cool babysitter who would let you try on her lip gloss once your mom left the house.  You idolized her, and your mom knew she could trust her.  That’s Joanie.  Only she’s also likely to completely ROCK THE ROOF OFF YOUR HOUSE!”

Joanie Leeds & The Nightlights have performed in dozens of cities nationwide at such prominent venues as The Kennedy Center, Lincoln Center, The Smithsonian, the CMAs, the Hang Out Festival, Symphony Space, Wolf Trap, and LA’s Skirball Center.

Joanie Leeds’ original kids’ music won first place in the USA Songwriting Competition, as well as winning an Independent Music Award, Parents’ Choice® Gold Award, NAPPA Gold Award, and Family Choice Award, and Joanie was a finalist in the John Lennon Songwriting Contest and the International Songwriting Competition.  Joanie’s music has been highly praised in People magazine, Parents Magazine, The New York Times and The Washington Post.  Her tunes are played on many radio stations nationwide and have climbed the chart to #1 on SiriusXM’s Kids Place Live and WXPN’s Kids Corner. Joanie is also a PJ Library musician! 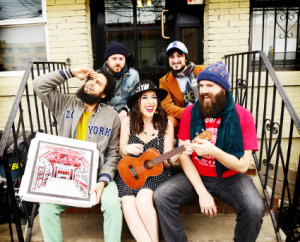 Prior to Brooklyn Baby!, Joanie Leeds released seven critically acclaimed, full-length albums and two full-length DVDS, in addition to numerous videos on her Youtube channel.  She is currently at work on more music videos, while maintaining a busy teaching and performance schedule.  Check her website for updated concert dates, and be sure not to miss them when they come to your hometown!