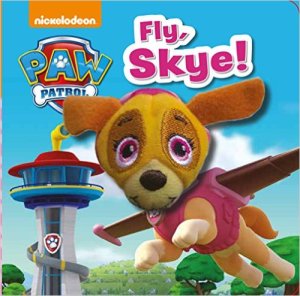 Join Skye and her pup pal Everest for a fun game of hide-and-seek all around Adventure Bay! Wiggle the finger puppet to act out the sweet rhyming story.

Our preschooler, Brie, loves Parragon Puppet board books and these are usually the books she will try to ‘read’ back to us with the puppet after she has memorized the words.  It’s so cute!  She was really excited about the latest puppet board book about two pups from PAW Patrol.  Just in case you don’t know about this animation series, PAW Patrol began airing in the United States on Nickelodeon in 2013.  The series is about a boy named Ryder who leads a pack of rescue dogs known as the PAW Patrol. Each episode the pups have a mission to accomplish and the catch phrase is “Whenever you’re in trouble, just yelp for help!”.

In Parragon’s board book, Nickelodeon Paw Patrol Skye Finger Puppet Book, the PAW Patrol pup named Skye is playing a game of Hide-and-Seek with fellow PAW Patrol friend, Everest.  As with all hide and seek games, the reader and Skye is not supposed to ‘peek’ and soon the pages reflect different scenes in PAW Patrol’s shoreside community of Adventure Bay.  This was the first time I’ve ever played hide and seek in a book, and it was fun to have Brie search for Everest on the pages.  It also helped that Brie is a fan of the show, so she was already familiar with the characters.  I love how the puppet books grab Brie’s attention and it even had Brie’s older sister interested in how the book would end.  This one is definitely a keeper.  Two paws up!

About Parragon Books:  Publishing for over 25 years, Parragon has aimed to exceed expectations, providing readers & retailers with high-quality, engaging content at incredible value.  Check out the Parragon Little Learners website page for more information about additional books and apps for young children.