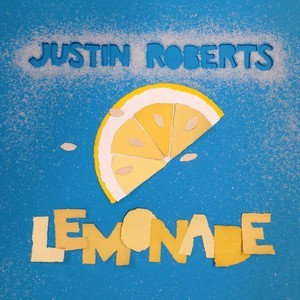 Be the first one on your block to hear Lemonade, Justin’s 10th recording for families. A locally grown organic treat!

Has it been three years since I last heard a new Justin Roberts album?  SAY IT ISN’T SO!  I mentioned this before in my previous reviews, but here’s a tidbit you might not know about Justin, but will LOVE, is he used to be a Montessori preschool teacher by day and in an indie-rock band Pimentos for Gus by night in Minneapolis.  Now a two-time GRAMMY nominee Justin Roberts, a leading independent family music artist, and “hands-down the best songwriter in the genre” (USA Today), will release a new album of original songs for families called Lemonade on October 14. While it’s just my third family album of Justin for me (hey, I did just started having kids in 2010, so cut me some slack for being behind the kindie music times!) it is actually Justin’s 13th album for families!

Lemonade features awesome performances by Robbie Fulks and Nora O’Connor (The Decemberists, Neko Case) and Justin and the Not Ready for Naptime Players have a bunch of fall shows lined up to celebrate.  Be sure to check out his touring schedule on his website below!  Lemonade is like no other Justin Roberts project because it is a mostly live in-the-studio recording featuring all acoustic instruments and 12 new original songs. If you think of a cool line-up of guests you’d love featured on your album, Justin has them all there, including: Robbie Fulks, John Abbey, Gerald Dowd, Nora O’Connor, Anna Jacobson, Matt Brown, Anna Steinhoff and more!

“After the giant rock of Recess and the thrill of writing my first musical (Hansel & Gretel), I decided I wanted to return to the simplicity of my earliest recordings and capture the sound of folks playing together in a room, no electric guitars, no big drum set, more ukuleles and banjos, cardboard boxes and paint cans for percussion, a warm stand-up bass holding it all together, a few single notes on a piano, maybe the pluck of a cello, and a hand clap or two.”

I really enjoyed the stripped-down live-musical feel of the Lemonade album that gave me some little flashbacks to his Lullaby album back in 2012.  Justin’s ‘Lullaby’ was a fun departure from his usual poppy and rocky albums, all about the wee hours before bedtime songs.  While this album is more indie-rock than emo lullabies, it’s not the get up and rock out songs you may be used to and that is why I love it so much.  It’s a great album to listen to with your kiddos about the great parts of growing up and we are ALL about the acoustic jams.  You gotta take the sweet with the sour and that’s why Lemonade goes down so deliciously.  It’s like having your own band playing in your living room and we don’t have to keep paying them to play over and over again.  Magnificent!

News for Book Lovers!  Justin has a new picture book “The Great Henry Hopendower” coming from Putnam in 2017!