Latin Grammy-winning 123 Andrés returns with a third album, “La luna,” a collection of classic and new lullabies in Spanish

I have been a huge fan of Andrés Salguero (123 Andrés) since 2014 when I wrote a review on his album ¡Uno, Dos, Tres con Andrés!  The Colombian native and musician has the most fantastic English/Spanish albums that are perfect for my girls who have been learning Spanish since preschool.  The now Latin GRAMMY winner 123 Andrés and his adorable wife Christina have performed in and around Austin for several years, although they just made his SXSW debut in March 2018!  If you locals had the opportunity to see him perform (including my favorite event Rock + Read at the Domain), he played songs off of his award-winning “Arriba Abajo” album and delighted the crowds with songs from his forthcoming lullaby album called La Luna (Canciones para Soñar) or The Moon (Songs for Dreams).

After SXSW 123Andrés stuck around Austin to perform at Esquina Tango on March 24 and my family had a fabulous time!  123Andrés shows are filled with interaction which is perfect for wiggly children and there are lots of opportunities to sign and dance using new or old skills (depending on your level) in Spanish, English and ASL.  The songs are wonderful for learning and they are super catchy.  Children and parents get up to dance and sing and my girls love it. 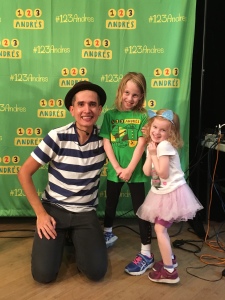 Fantastic concert @esquinatango with the amazing @123conandres and the lovely Christina!

La Luna is now available to purchase and this delightful album has a wonderful South American flavor that features guest vocalists from Bolivia, Argentina, Ecuador, Mexico, Colombia, Venezuela and the US.  Listeners will hear genres including loncomeo from Patagonia, candomble from Uruguay, huayno from the Andes and merengue from Venezuela.  Wow!  While “Arriba Abajo” is a high energy album by 123Andrés, La Luna is the perfect answer for wind down time!

The sweet lullabies on La Luna were recorded and produced in Mexico and Argentina, and includes rhythms and instruments of the Andes.  La Luna has both classic and brand new lullabies featured primarily in Spanish and are the perfect companion for nap time.  A fun surprise that closes the album is an appearance by Little Miss Ann (the fantastic Chicago based kindie artist) with a adorable song in English and Spanish called “Fly, Shine, Soar”.  Andrés is not only super talented and entertaining as an artist (who also happens to hold a Doctorate in Music!), he is also a wonderful human being who truly enjoys teaching.  La Luna is fun and enjoyable to hear as a parent, and I delight in the fact that my girls are learning and speaking Spanish.  We look forward to more 123Andrés shows in Austin (he tours continuously throughout North and South America) and I see many more GRAMMYs in 123 Andrés future!  Love!