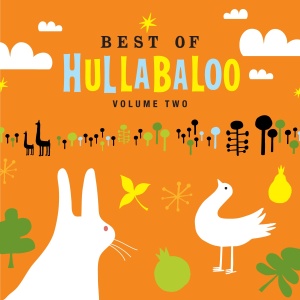 As a prelude to their 3,000th show and to celebrate thirteen years of glowing critical acclaim, the beloved “free-range, organic kid-folk” duo Hullabaloo has compiled a sparkling new collection of Hullabaloo favorites for kids and families.  Their anticipated 13th album, Best of Hullabaloo: Volume Two, is released on February 24, 2017.  Check it out if you are looking for a awesome music stomping time with your family.

Hullabaloo has always been like little fiddle-and-banjo-filled ‘raising hell’ of the Johnny Cash era for the kids of today. Hilarious! They are a little bit country, blue-grass and even folk since it mixes each element so seamlessly throughout their albums. Whatever it is, it is fun and danceable and the lyrics will make you laugh out loud. For their “lucky 13” release, Hullabaloo’s Steve Denyes and Brendan Kremer decided to feature three favorite songs from each of the past five Hullabaloo albums.

Explains Steve Denyes, “We released Best of Hullabaloo: Volume One in 2009, followed by five new albums.  To establish a milepost for our 3,000th live show, we wanted to bring out another ‘Best of’ album.  Of course, the hardest part was choosing the songs, an impossible task, really.  In the end, we chose a balance that reflected ‘fan favorites’ as well as our own favorite songs that we play live on a daily basis.”

Best of Hullabaloo: Volume Two kicks off with “Sleep Well Tonight,” featuring Hullabaloo’s signature updated country/bluegrass sound, this time floating on a cushion of hambone, Bo Diddley rhythm.  With country charm and irrepressible silliness, “Dog Song,” a loping ode to man’s best friend written by the late, great Steve White, has a visceral appeal that reflects a combination of Woody Guthrie, Jimmie Rodgers, and re-runs of Hee Haw.  Pure onomatopoetic joy is the raison d’être of “Siren Song,” a tribute to first responders that features musical portraits of a fire truck, police car, and ambulance.  With up-tempo energy, the outrageously funny “I’m Hungry” describes how the trashed out nature of a kid’s car seat can serve as an appalling repository of emergency rations.  The album features some of our favorite songs of past albums from Shy Kid Blues and Raise a Ruckus much to my family’s delight.  Hullabaloo has also been featured at the Austin City Limits music festival in past years so be on the lookout of the Kiddie Limits bands in 2017! 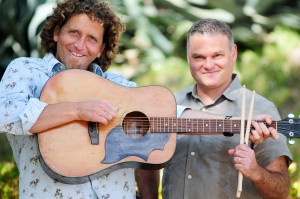 About Hullabaloo:  Steve Denyes and Brendan Kremer met in kindergarten and have been friends ever since.  Together they started playing music in the 5th grade band, where they vigorously exhibited their burgeoning talents on “Old MacDonald” and “Twinkle, Twinkle Little Star.”  Little did they suspect that, decades later, these songs would still be among their biggest hits!  Steve grew up to be an elementary school music teacher, folksinger, and songwriter, while Brendan became a rock ‘n’ roll drummer.  The maiden voyage of Hullabaloo took place when they teamed up to play a few songs at the first birthday party of Brendan’s twin daughters. Fast forward thirteen years to find that Hullabaloo has performed nearly 3,000 shows throughout the country at venues ranging from birthday parties to fancy concert stages like the Austin City Limits Festival, Philadelphia’s World Café Live, the Hard Rock Café, and LEGOLAND.  Along the way they’ve released a dozen award-winning albums (at last count, with more than 30,000 sold) and developed a loyal following nationwide. Among the seventeen major awards garnered by Hullabaloo are those presented by Parents’ Choice®, NAPPA, and Children’s Music Web.  Parents’ Choice® enthused, “They raise their own foot-stomping ruckus with humor, infectious energy and appealing blend of country, folk, funk, and rock rhythms.”