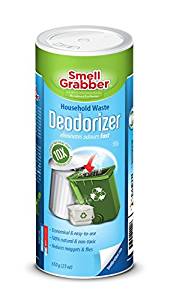 Did You Know? Many air fresheners contain various unhealthy chemicals like phthalates that can cause hormonal abnormalities, birth defects and reproductive problems as per the Natural Resources Defense Council (NRDC).  Yikes!

I’m actually very excited to tell you about a new all-natural deodorizer that is over 10 times more effective than baking soda and I could tell the difference immediately in our waste bins.  Smell Grabber is an all-natural volcanic mineral called zeolite.  It is 100% natural and contains no added chemicals or dyes. It is safe around pets and children and you can use it anywhere even in your refrigerator to absorb smells.
—
What is zeolite?
—
Great question!  Since I’m no scientist, I’m going to take the answer directly from Smell Grabber’s Frequently Asked Questions to explain. Zeolites are microporous, aluminosilicate minerals commonly used as commercial adsorbents and catalysts. Zeolites are natural volcanic minerals that are mined in certain parts of the world. When volcanoes erupt, molten lava and thick ash pour out. Because many volcanoes are located on an island or near an ocean, this lava and ash often flows into the sea.  Thanks to a chemical reaction between the ash from the volcano and the salt from the sea, amazing minerals like zeolites are formed in the hardened lava over the course of thousands of years. What makes zeolites so amazing is the fact that it’s not only one of the few negatively-charged minerals found in nature, but it also has a very unique structure. Zeolites have large, vacant space or cages that allow space for large, positively charged ions to be attracted to it, then trapped and eliminated from the atmosphere.  Got it now?  Good!
—
You can use Smell Grabber throughout your home anywhere there is a rancid and undesirable smell! Smell Grabber actually traps the gases that cause many of the common odors in our day to day lives.  In laboratory tests, Smell Grabber was proven to be 19.1 times more effective than baking soda at absorbing odors.  WOW!
—
The 650g canister lasts more than 60 days with regular use.  Unlike air fresheners that only mask odors Smell Grabber continuously absorbs many horrible smells coming from such gases as:
Use Smell Grabber in the following places: 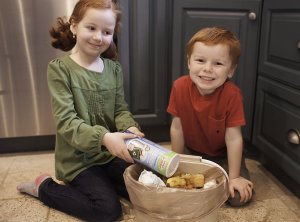