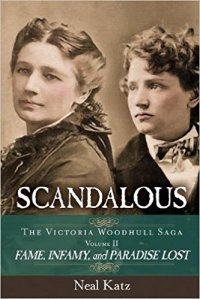 Volume 2 of The Victoria Woodhull Saga brings Victorian America and the struggle of women to life. The facts amaze, audacity engages, lascivious adventures entertain, and the abuses of power render all of it Scandalous!

I finally got around to reading Volume 2 of The Victoria Woodhull Saga!  The first book, OUTRAGEOUS: The Victoria Woodhull Saga, Volume 1, Rise to Riches (outrageousthebook.com) was released during the last American presidential political debates and election when a female became the first Democratic candidate to run for President and the time just got away from me.  However, recently, I thought of Victoria and wanted to learn more of her story.  Victoria Claflin Woodhull (1838 – 1927) was the first woman invited to speak to the United State Congress, and then the first female to run for President.  Even though our last election was in a different time and climate, women are still battling much of the same inequities Victoria and her sister faced.  Victoria’s story can and should stand on its own but there are lessons to be learned to not repeat infighting and elitism among those who are still striving for equal and legal standing.  Empowerment and sustainable economic improvement of women in the United States is a far cry from being accomplished. If we are looking for ways to improve women’s status in the world, we have to keep going.  Volume 2 was a great way to gain perspective on just how far women have come in our country and how much further we still need to go.  Amazingly, the fearless Victoria’s political platform in the 1870’s was, “Women suffrage and equal legal standing, regulation of monopolies, nationalization of railroads, an eight hour workday, direct taxation, abolition of the death penalty, welfare and education for the poor, and equal pay for equal work.”

In Volume 2, the ‘historical fiction’ of Woodhull by author Neal Katz, creates generous dialogue backed up with actual facts, articles, and speeches set in and around New York City in the early 19th Century.  Victoria Woodhull and sister, Tennessee Celeste Claflin, take the city by storm as they challenge morality, fashion, economics, social justice, and equal pay for equal work. Leveraging their wealth as the sisters become famous on the lecture circuit, they fight for women’s rights, suffrage and enter into the political arena as Victoria is nominated by the American Equal Rights Party to run for President of the United States and Tennessee runs for Congress.  True accounts are absorbed into the perceived conversations with some of the most prominent figures in America at the time including Elizabeth Cady Stanton, Susan B. Anthony, Reverend Henry Ward Beecher “the Most Famous Man in America,” Cornelius Vanderbilt “the Richest Man in America,” J. P. Morgan, and Frederick Douglass.  The course of events lead to the “Trial of the Century” and retribution.  Scandalous engages the reader as the strong female leading characters change the course of history in America–at enormous personal and financial expense.  “Upward & Onward”, there is still work to be done.

Scandalous is Volume 2 of The Victoria Woodhull Saga. Volume 1, Outrageous: Rise to Riches earned ten awards and high acclaim, and the Saga has been optioned for a long-running TV series.

Charity:  Katz has pledged one half of book sale proceeds to charities dedicating to the empowerment and sustainable economic improvement of women, especially single mothers.

About Author Neal Katz:  Neal Katz is a serial entrepreneur. He harbors a passion for women’s rights and his lifestyle is centered on self-awareness and love. His novel “Outrageous: The Victoria Woodhull Saga, Volume One: Rise to Riches” (thevictoriawoodhullsaga.com) spotlights gender prejudice, exposes early manipulation of “free markets” and reveals how political power structures used prison and seizure of assets to prevent innovation and social change. Katz promotes a new financial paradigm to monetize charities through Credit Funding, which will provide sustainable and renewable funding for diverse charitable endeavors, such as micro-finance, low-income housing, education, vocational training, and infrastructure renewal, without a single dollar donated.

For more information and a review of the Suffragette movie, please visit: www.thevictoriawoodhullsaga.com