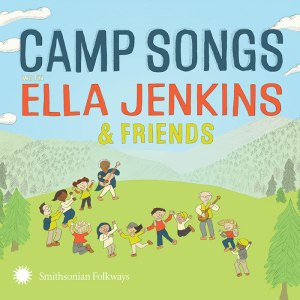 Renowned children’s performer Ella Jenkins has vivid memories of singing at summer camps, and if you were a camper, you must too!

If you do not know about Ella Jenkins, she has quite a reputable catalog of music.  Let me try to break it down to some highlights you should know about this amazing singer/songwriter for kids:

Ella once again inspires me to always be musical with my kids and I love her fun and music and movement albums. Ella Jenkins and her friends invite you to share her camp experiences and celebrate her 60 years as a Folkways artist with her new recording called ‘Camp Songs with Ella Jenkins and Friends’. She released her first album for Folkways in 1957, and her 1966 album “You’ll Sing a Song and I’ll Sing a Song” remains one of the best-selling titles in the history of Smithsonian Folkways. She received a Lifetime Achievement GRAMMY Award from The Recording Academy in 2004. Ella assembled a group of children, parents, and teachers from the Old Town School of Folk Music in Chicago, along with Tony and Kate Seeger from Camp Killooleet, to sing these classic camp songs, rounds, silly songs, and campfire sing-alongs with you.  Wow!

Ella, who turns 93 in August, remembers sharing camp songs with her brother when she was growing up in Chicago. As a teenager and young woman, she was a camp counselor herself, and that’s where her career as “The First Lady of Children’s Music” blossomed. Ella’s influence on sharing folk and world music with children continues to this day. Camp songs are part of kid culture, handed down from one generation to the next. 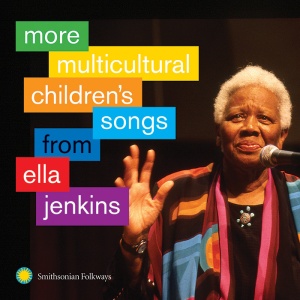 Many of the tunes on “Camp Songs with Ella Jenkins and Friends” have been sung by generations of campers, including many of the 14 million children and adults who attend camp every year in the United States. The album begins with a chorus of children singing the familiar round “Row, Row, Row Your Boat.” These selections come from a variety of traditions, among them African-American spirituals, European folk songs, and Jewish summer camps where Jenkins has performed. “Everybody Loves Saturday Night” has lines in a dozen languages, including Mandarin, Hindi, Serbian and Nigerian. The album’s final five numbers, which include “Sloop John B.” and “Goodnight Irene,” are sequenced to resemble a campfire sing-along.

“Camp Songs with Ella Jenkins and Friends” was produced by Tony Seeger, nephew of folk-music icon Pete Seeger. Tony Seeger also wrote the included liner notes and lyric annotations for all the songs in the 36-page booklet that accompanies the album. Throughout the album, Jenkins sings and plays harmonica, often offering reminiscences and spoken-word introductions to the songs.

Move along with them and make them your own! Most of all, have fun!

Check it out!  A tribute concert in honor of Ella and this album is planned at the Square Roots Festival in Chicago on July 8.  Artists and students from the Old Town School of Folk Music will sing for Ella.  I have a hunch she’ll want to join in.  For more information about Ella Jenkins, visit www.ellajenkins.com.