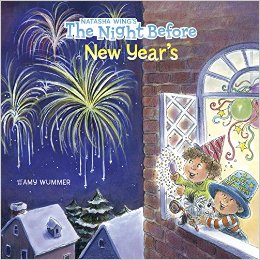 The Night Before New Year’s (Paperback)

The newest title in Natasha Wing’s bestselling Night Before series!

In The Night Before New Year’s, it is aptly named for the title as it is the night before New Year’s Day!  It’s the perfect book for young children who are trying SO HARD to stay up until midnight.  In fact, even my first grader has yet to make it to midnight on New Year’s Eve.  There is so many fun things for the kids to do and wear, like playing with sparkly streamers to wearing festive party hats.  The kids pig out on food, play game after game, and slowly realize that they are so sleepy they aren’t sure if they can make it to when the clock strikes twelve.  The book is filled with colorful illustrations, fun rhyming, and easy to understand.  On top of that, it shows how many people celebrate the coming of the New Year.

About the Author:  Natasha Wing was born in Milford, Connecticut in 1960. At the age of 20 she moved to Arizona where she finished college at Arizona State University in 1982 with a B.S. in Advertising. In 1988 she married Daniel Wing and moved to Northern California where she worked in advertising for a number of years.  It wasn’t until 1991 that she decided to write children’s books. Luckily she sold her first book, Hippity Hop, Frog on Top, within 6 months and has been writing children’s books and articles ever since. Her second book, Jalapeno Bagels, came out in June 1996 with Atheneum Books. The Night Before Easter, was published with Putnam All Aboard Books. She has also been published in Humpty Dumpty’s Magazine, Girls’ Life, and Hopscotch for Girls, and has two recipes in Writers in the Kitchen.

The Night Before New Year’s (Paperback)

One thought on “The Night Before New Year’s (Paperback)”