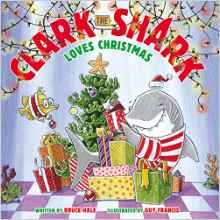 Clark the Shark is excited about his class’ Secret Santa celebration, but what will happen when he becomes so wrapped up in what he’s going to get that he forgets to give?

This was a hilarious book to read to Brooke because I had to explain the concept of a Secret Santa exchange, or as we called it in Ohio, the ‘White Elephant’ office exchange.  Brooke, of course, asked “WHY was it called a White Elephant exchange?” because – well, she’s SIX, and has to know everything.  I certainly didn’t know, so I had to look up the origin and found it to be quite hilarious.  Apparently, a white elephant is a term that derives from one of the kings of Siam (now Thailand) where an owner has something that they can not dispose of or it lacks usefulness or is too expensive to maintain.  Basically, it’s a gift you DON’T want.  At the time, elephants were valuable, but once they became older or out of control, the cost of their maintenance was more than the animal was deemed worth – so getting a white elephant from the king of Siam was not a happy occasion.  To play on this ‘bad gifting theme’, the idea of a ‘White Elephant’ gift exchange around the holidays is basically anonymously exchanging a gift where the object has little value or use and players can decide to swap or get stuck with their gifts.  This was what I was accustomed to until I moved to Austin.  Apparently, Secret Santa exchanges are nice gifts you give to others and not as a joke like my exchanges of the past, much to my relief!  I went from getting paper towels to nice bottles of hot sauce.  Plus, Secret Santa exchanges are usually the luck of the draw of picking out a name so you know who you are getting a gift for and not a random game like the ‘White Elephant’ exchange.  That means you can buy a more thoughtful and useful gift for your recipient.  All in all, it’s all in the holiday spirit and a way to bring office co-workers together during the holidays.

Clark the Shark doesn’t work in an office, in fact, he is still going to school, but that doesn’t stop him from helping organize a class Secret Santa exchange.  No one loves Christmas more than Clark! However, Clark is obsessed with finding out who his Secret Santa is so he can spoil his own surprise about who is getting him a present.  Unfortunately, with all his scheming, Clark forgets to get a present for his Secret Santa pick! What is he going to do when he shows up with no gift?!?  Perhaps Clark will learn his lesson about the spirit of giving or maybe it will be a lesson of humility for our fun-loving shark?  You have to read the book to find out!  Featuring bright, colorful artwork from Guy Francis and hilarious read-aloud text from Bruce Hale, this Clark the Shark picture book is the perfect story for Christmas reading fun.

About the Author:  Bruce Hale has written and/or illustrated over thirty-five books for kids, and is the author of Clark the Shark; Clark the Shark Dares to Share; the award-winning Chet Gecko Mysteries series; Snoring Beauty, one of Oprah’s Recommended Reads for Kids; and the School for S.P.I.E.S. series. In his free time, Bruce enjoys hiking, watching movies, and making music. He lives in Santa Barbara, California, with his wife, dog, and many hats. You can catch him online at www.brucehale.com.  Clark the Shark: Afraid of the Dark is a 2016 Children’s Choice Book Award finalist!

About the Illustrator:  Guy Francis spends most of his time drawing, painting, and drawing some more. He has done a variety of illustration work in the children’s market, including editorial and educational illustration, chapter books, and picture books. He freelances from his home in Provo, Utah, where his wife and four children are his own personal art critics and bring a healthy bit of chaos to the studio. Every now and then he gets out of the house and heads to the mountains with his family. You can visit him online at www.guyfrancis.com. Readers will smile as Clark learns the true meaning of Christmas.