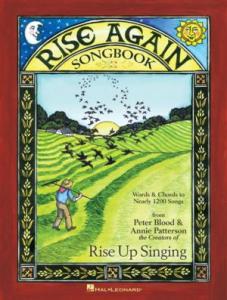 The creators of Rise Up Singing have just completed their new book Rise Again. http://riseupandsing.org

“The best, most exhilarating and glorious history of the United States: a singing history. It is more than a lovely songbook — it is a play-work-fight-freedom hymnal” — Studs Terkel, writing about Rise Up Singing

Before I begin this review, I’ll add a little bit about the man, myth and the legend known as Pete Seeger.  Last year I started to compile a book on Appalachian folk music.  Why?  Well, I am from Appalachia and I love music so it all seemed to make sense to delve into my musical past.  Fast forward another year and after working with several publishing companies where my project never got off the ground for various reasons, I still have a wealth of knowledge of some very important folk musicians in the movement.  I thought I’d start off sharing a bit about Pete before going into this latest songbook dedicated to many musicians, especially Pete, who make up a very important part of American music history.

“I look to myself as the planter of the seeds.”

I suppose when your father is a musicologist (who introduces you to Lead Belly and Woody Guthrie when you are young) and your mother is a concert violinist from New York, you are going to be interested in music and journalism. Peter Seeger had a unique and quite extraordinary upbringing that began in 1919 and spanned until recently in 2014. He was born in Manhattan and attended boarding school in Connecticut so you wouldn’t think of the word “folk” when describing his upbringing. However, his parents had divorced when he was young and his father married a composer who collected and transcribed rural American folk music. Coincidence? Nope! The music and the tradition surrounding Folk as well as many environmental endeavors became an obsession for Pete. This unique opportunity of history and music began an entire movement started by one man’s desire to preserve rural music that was supported by his family. If Lunsford got the people together to make a Folk music movement happen through a festival, Pete Seeger was the man that fought to keep the movement going.  It may seem strange that a child of privilege who worked at the Library of Congress assisting Alan Lomax in archiving American Folk music through his father would soon become a voice of not just his, but several generations!

“My job is to show folks there’s a lot of good music in this world, and if used right it may help to save the planet.” (2009)

Did you know?  In 1959, Pete Seeger was among the founders of the popular Newport Folk Festival

So after that lesson, on to the review of the book called Rise Again: A Group Singing Songbook!

After more than a quarter of a century, the long wait is over! From the creators of the beloved songbook Rise Up Singing, comes its much-anticipated companion Rise Again: A Group Singing Songbook, with preface by Pete Seeger and foreword by Billy Bragg.  Conceived, developed, and edited by folk singers Peter Blood and Annie Patterson under the guiding hand of the late Pete Seeger, Rise Again is a treasure trove of lyrics and chords to 1,200 well-loved songs spanning genres as diverse as British Invasion, blues, country, jazz, Motown, composed folk, traditional ballads, gospel, Broadway, early rock ‘n’ roll, alternative/indie artists, “pub songs” and much more, arranged in 39 themed chapters, with commentary on the songs, cross-reference listings at the end of each chapter, and Artists, Cultures, and Titles indexes.

Pete Seeger played a central role in the development of both Rise Up Singing and Rise Again. Following the publication of Rise Up Singing in 1988, Pete Seeger urged the creation of a second songbook with the same format as Rise Up Singing but with even more inclusion of genres that were not heavily represented in the original book. Until his death in 2014, he regularly sent Annie Patterson and Peter Blood suggestions for songs to include in the second volume, lobbying for a balance of song genres and subjects, and for the songs to reflect a message of empowerment and positive change through community music making.

Every page of Rise Again: A Group Singing Songbook reflects the vision of Pete Seeger, who did not believe in artificial boundaries like “folk music”‘ and constantly encouraged Patterson and Blood to center their work on songs he referred to as “people’s music”– songs about real life experiences that real people enjoyed singing together.  Pete Seeger also wanted Rise Again to reflect all the arts. To that end, almost every available space in the book is filled with delightfully imaginative and extemporaneous drawings by artists Annie Patterson, Meghan Merker, and Mona Shiber, with beautiful cover art by Mary Azarian.

Annie Patterson & Peter Blood have, for many years, been advocates of group singing as a way to build community and promote peace and justice throughout the world. Thirty years ago they approached Sing Out!, a folk song magazine founded by Pete Seeger, about publishing a unique kind of songbook. The idea was to create a book with words, chords, and sources (but no music) to 1,200 well-known songs for use by lay musicians and in group singing. Pete and Toshi Seeger persuaded Sing Out! to take on this project, and Seeger’s manager helped secure the song licenses from major publishers. Over 200 musicians, including Bob Dylan, Paul Simon, Judy Collins, James Taylor, and Bruce Springsteen, donated the use of their songs for the book.

Rise Up Singing quickly became an underground best-seller, selling well over half a million copies by word of mouth. Pete Seeger declared, “It is making a qualitative difference in music in America.” Well-known musicians, from Canadian folk singer Eric Anderson to English folk rocker Billy Bragg began to carry the book with them when they toured. Rise Up Singing has helped to spur a renaissance of group singing, with hundreds of groups holding monthly or even weekly singalongs and song circles in churches, synagogues, libraries and pubs across North America.

In admiration of Peter Blood’s work on Rise Up Singing, Pete Seeger asked Blood to edit his musical autobiography, Where Have All the Flowers Gone: A Singalong Memoir.

A portion of the proceeds from almost all of the Rise Again concerts will benefit the new Carry It On Fund, a source of support for organizations and causes to which Pete and Toshi Seeger were deeply committed.  This is an amazing compilation of the history of folk music and I am excited that this can be enjoyed by generations to come.  Hey, maybe someday I’ll get my American Folk Music book for kids published, but in the meantime, I love being able to read and champion projects like this that shed light on this American tradition.

Rise Again: A Group Singing Songbook is available at music and bookstores everywhere or by visiting the Hal Leonard website or the Rise Up and Sing website.